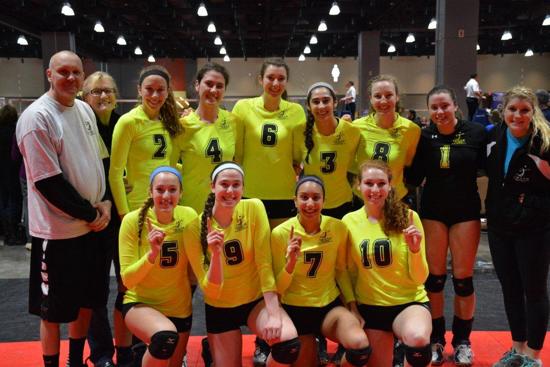 Most Entertaining Match: This one belongs to the Charleston Juniors-SMASH 16s 17 Open semifinal contest that was looking like it would never end — and helped set the day’s schedule back another 30 minutes! SMASH won the opening set 25-23, Charleston Juniors forced the tiebreaker after a 25-16 second set. Once the contest got to 14-13, the teams started trading points until Charleston finally won 21-19.

SMASH sent 3 of the 18 New England teams that attended the tournament and was the highest-finishing New England Club in both divisions the club entered. SMASH 16s and SMASH 17s each competed in 17 Open, the highest level of competition at that age, finishing 3rd and 49th, respectively, out of 64 teams. SMASH 15s competed in 15s open and finished 49th of 64 teams.

The SMASH 13s traveled to the Pumas Friendship Tournament this weekend and had excellent success against 14 and under competition.

The tournament consisted of 7 teams that played a round robin against each other. This format allowed SMASH to try different lineups every set. Coach An Le was pleased with the team's performance.

"We got a nice balance of confidence building and of where and how much more we need to improve," Le said.

Le highlighted the 13s strong serving and said it played a big part in their success.

Le said that the team would work on their communication as several balls hitting the floor untouched contributed to the close defeat. Overall, the coaches were proud of the team and have big expectations for the future.